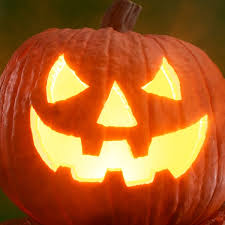 So the final day of October is upon us and dress up time for the children amongst us, but indeed is celebrated by all ages, this means Halloween.

Halloween originally began as a festival of Samhain, which was part of the ancient Celtic religion in Britain and other parts of Europe.

At the end of the summer, the Celts believed that the barrier between this world and the world of ghosts and spirits got really thin and meant that weird creatures with powers could wander about earth.

The Celts would hold a big party in the hope of scaring away the ghosts and spirits.

Later the Christian religion, naming the day All Hallows´Eve (the day before All Saints day on 1st November) was introduced.

From here America during the 19th century really got involved with Halloween celebrations and it really took off.  Then through the 20th century it became more and more popular with trick or treating and pumpkin carving.

Now in modern times it is still more popular in the United States than in other parts of the world, with an excuse to dress up as ghosts and ghouls, zombies, vampires, witches or even your favorite film or cartoon characters. However most countries still celebrate this time in their own way.

Here in Spain, big cities now have more themed events and costume parties especially as the following day is a national holiday.  So many Spanish are happy to enjoy the celebrations as there is no work or school the day after.

On the religious or more meaningful side of the celebrations the Spanish celebrate the 1st November for “Dia de Difuntos” or “Dia de Todos los Santos”, Day of the Dead or All Saints Day.

Although the two events are different, the day of the dead is to commemorate the dead relatives and All Saints Day for the saints.

It is a family day of high religious significance, where families visit the graves of loved ones and leave flowers.  Mass is also known to be held three times on this day.

So as much as Halloween is celebrated here in Spain, there are costumes worn to school and local parties but they do not have the hype of America and say Britain with the custom of knocking on peoples doors doing trick or treat or elaborately decorating their houses with scary things.

For them it is really the night before a remembrance day and on the 1st November spending it together as a family.