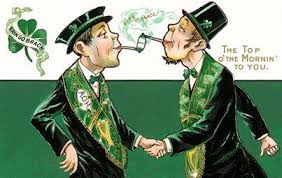 Its not long now and the countdown has begun for the 2019 Cabo Roig St Patrick’s Day Parade.

We need to remember that St Patricks Day is for everyone and for that day everybody is Irish.

Many may think that this brilliant afternoon and the festivities just happen, but a lot of planning and fundraising goes into this day.  Many local businesses contribute their time, talents and efforts, putting on many things through the year to fundraise for the event which is around €15’000.  Another key person in the successful organisation and running of the parade is Sofia Alvarez, the councillor for Tourism and foreign residents at the Orihuela Town Hall.  Each year she organises the necessary permissions, police assistance, advertising, staging, seating etc and without her help the parade wouldn’t be the success it is today.

For those who arrive early enough and need to park it is best to try the side streets in La Regia or near the beaches, but spaces will fill up quickly.

Festivities will begin at approximately 1pm with a Wild West big shoot out at the Depot. For those wanting a seat along the 2-kilometre parade route its best to get them early.

This year besides the parade there will be a craft market situated in the carpark beside the medical centre over the whole of the weekend, so both Saturday 16th and Sunday 17th March.

This year as St Patrick’s Day falls on a Sunday, the organisers have arranged FREE face painting for children of all ages along the parade route.  The locations are confirmed as between Milo’s and Peter Pan’s, near Banco Sabadell and over at the Depot.  We have also been informed that the beautiful Elsa and Anna from Arendelle will be involved in the face painting themselves.

The 2019 parade will be the 9th parade held in Cabo Roig and it has become world famous.  It has been voted the best in Spain and mainland Europe and the 9th best in the world according to Google.

We believe that this year’s parade will be bigger and more spectacular than before, with more dancers, floats, activities, bands and fun to be had by all.

The Grand Marshall for this year is Joe Egan the Irish Heavyweight Champion and the only sparring partner that Mike Tyson couldn't put down prompting his famous quote ''Joe Egan is the toughest white man on the planet''. He is known for his fight where he went the distance with Lennox Lewis, his acting role in Guy Ritchie’s film Sherlock Holmes and now a close friend of Mike Tyson.  We are delighted that he is giving his time to take on this duty for our 2019 parade.

So put the date in your phone, diary, calendar and we look forward to seeing everyone at Cabo Roig on March 17th to enjoy the CRAIC.